Here are all the links to Old School Anime Soundtracks etc that I was able to recover from my previous uploads. In this post, there will be no cover pictures.

As always, let me know if any of these links gets broken.

Hi there my faithful fans!

This is truly a long letter to you. I just really hope that you will understand why I haven't been able to update your questions about the links etc. Here's an explanation:

The links to my archive of anime soundtracks and so on is the easiest thing for me to fix.

However, to keep up with everything & everyone is a whole different story + reposting all the sites/links. I'm not doing anything of this for money. Only for you fans
On that note: there's been a lot of things happening as of the the last year, like being part of Fansub project. At the moment I'm working on some obscure old OVA's, SF Saiyuki Starzinger. Trying to get Genshi Shonen Ryu fansubbed into Swedish and perhaps other languages. Except that, I'm trying to get a solo album released as well.

Regarding such anime soundtracks and other wonderful things like the God Mazinger LP and the other Anime soundtracks on my blog: there's been many links as of late that has broken down there such as many of Hokuto no Ken LP, Sakigake!! Otokojuku records etc


If there's a will to get all the stuff up and running, I really need your help. At least in a way where I can get all the info.I will get on it as soon as I can. This is a result of me having to fix it over and over. So just to check: is there anyone out there who would help me to sustain the page etc? Of course, you will become admin(s), however, that can be a while. As I need to get to know you and & have confidence in you.

I would appreciate it, if you could write down the broken links here. That's a good place to start.

Some words from The Skaro Hunting Society first:
Two more episodes of Leiji Matsumoto’s science fiction retelling of the Chinese epic saga Journey to the West, known as Saiyuki in Japan. In episode 12, the Queen Cosmos must break through a gauntlet of fire known as a Soul Zone, without roasting Princess Aurora in the process. In episode 13, at the edge of the solar system an unidentified cosmic lightshow cuts off their communications with Earth, and the Queen Cosmos is forced make an emergency landing on a planet split in two by war.
Get them from Nyaa or Mega: 12  13
Thanks to Gxseries, FreekieDee and all the other former members of ILA Fansubs for the scripts.
And of course thanks to Gou no Ken for all of his help and support on this project. Check out his blog for lots of rips of cool old school vinyl soundtracks, including a post with Starzinger soundtracks here.
Re: Thanks a lot for the awesome feedback :) The Skaro Hunting Society with Nanto as the spearhead are easily among the top in the Old School Anime Fansub club.
For those who have wondered abot the broken link for the vinyl soundtracks to Starzinger: A new one has been added and I've added catalogue numbers to everything as well. However, you can download them from this post right away
SF Saiyuki Starzinger Vinyl Soundtracks 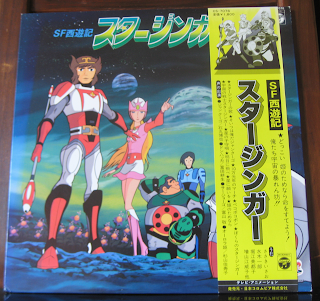 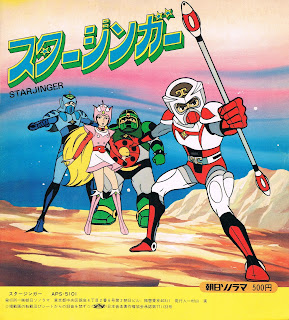 Yes, KingMenu Subs has done it yet again, taking an old hidden gem and fansubbed it. There's no end to the thanks I'm sending, both for what you have done in the past, and that you guys still are going strong as ever! Now to main event:

Shinokita Reiko and Yajima Junko are second-year high school students who travel from school to school fighting bad guys, ninjas, yakuza and corruption. At this high school they encounter a secret ninja order and a corrupt administrator, as well as a tragic death in the distant past. With the help of Kotetsu, a skilled ninja, they set the school to rights, but not before leaving several broken hearts behind. 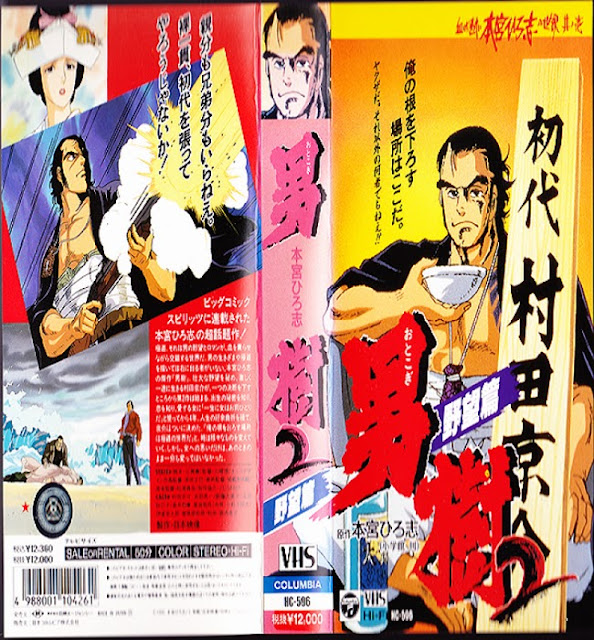 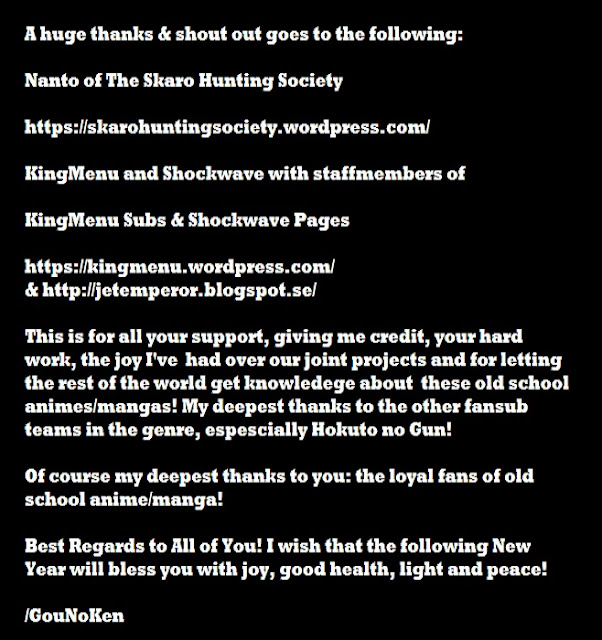 Hello to you lovers of old school anime/manga!

This release goes out to all of you loyal fans who has followed this site, aswell as the previous ( Spear of Ryu ) and espescially to Nanto of The Skaro Hunting Society, KingMenu & Shockwave with staff members of KingMenu Subs and Shockwaves Pages.

Your contributions to this genre of anime is beyond awesome, it's truly a privilege to be a part of your projects!

Onwards now to this [RAW] release: This seems to be quite an obscure anime. VHS is the only media I've seen it on. Everything is ripped and encoded by me. 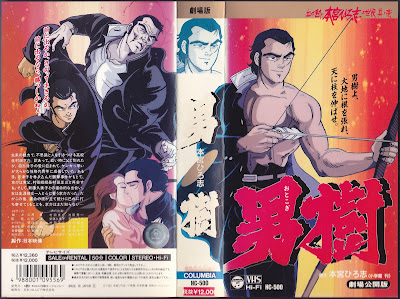 * Based on the seinen manga by Motomiya Hiroshi.

After his father leaves when he is very young, Kyosuke Murata grows up under the thumb of his overprotective mother, Shizuko. When he reaches adulthood, he is thrown into the harsh, violent world of Japanese gangland when his mother becomes involved in a gang-related crime. He goes up against the Murata-gumi organization, only to find that his estranged father is its head. Rising up through the ranks, Kyosuke eventually unites half the gangs in Japan beneath his own leadership, only to find that the other half have also combined to resist his new power, starting the greatest gang war in Japanese history.

Write down your thoughts about this OVA and leave a comment, so I know if I shall continue releasing this anime.


May this new year be blessed in every way for all of you!

Posted by GouNoKen at 7:26 AM No comments:

This is indeed an early Christmas present, and what a Christmas gift! Not one, or two but three separate releases with really awesome old school anime :) 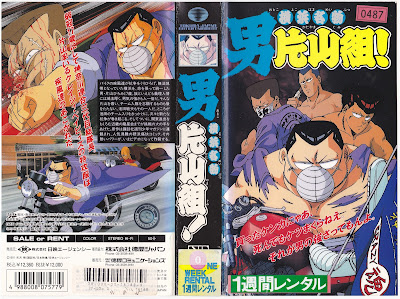 The city of Yokohama has become a lawless district for biker gangs. One particular gang, the Crazy Babies, have a 17 year old leader called Hiromi Katayama that is famous throughout the entire Kanagawa alliance as being a strong fighter with a devout sense of morality. However, when a young rookie by the name of Toshi Ikeda wants in, he swears to Katayama that he will uphold the ideals of the Crazy Babies and vows to not fight with anybody for his first probationary month within the gang or else forfeit his chance to join the gang.

Ikeda being the fiery young man he is, soon finds himself caught in the middle of a fight and unintentionally sparks off a feud between the gangs of Kanagawa and the dangerous Nagoya based group, The Dragon Star Crew, who have their eye on taking the whole of Kanto.

Can Katayama defend Yokohama from the encroaching hoodlums?

For more info and download link, go to the awesome KingMenu site: 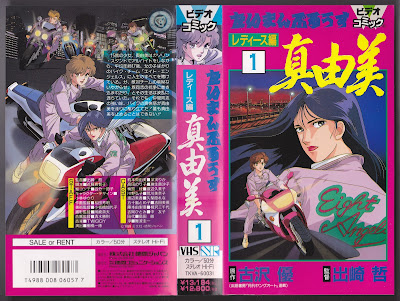 Fifteen-year-old Mayumi has to move to the rough end of Osaka when her parents split and remarry. She meets Noriko, who helps her settle into her new life. Through Noriko's job at a petrol station, they got to know Big Bear and his biker gang, and eventually get into their own gang of girls racers.

For more info and download link, visit the KingMenu site:

Last but not least:

Hurry Back to Earth! Star Crow 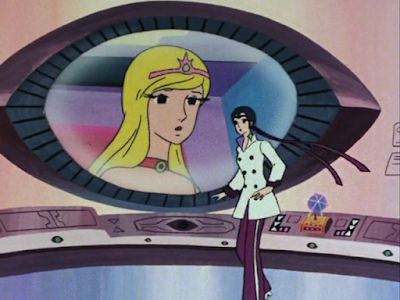 Professor Mad is intent upon capturing Princess Aurora and turning her into a cyborg. He uses a mechanical monster called Satan Bird to attack Professor Kitty’s lab, in an attempt to steal the navigation course of the Queen Cosmos. Will Kugo, Djorgo and Haka be able to stop Satan Bird in time?

I really want to take this chance to give my deepest thanks to KingMenu with staff for the year that has gone by, you guys have really done much for old school anime OVA´S, Movies, Specials etc by fansubbing. I'm eager to see what next year has in store!

Another person who also means much for the fansubs of old time anime is Nanto from THE SKARO HUNTING SOCIETY. Thank you for all that you've done!